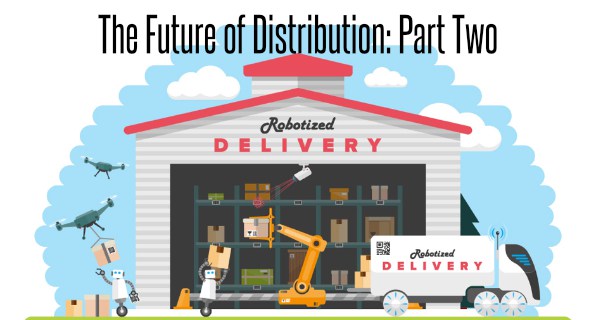 Editor’s Note: This is a guest blog from our friend Jake Rheude with Red Stag Fulfillment. In part 2 of the 3-part series, Jake discusses the new technologies that are introduced and how they effect your distribution system.

New Technologies Waiting in the Wings

There are several new technologies that have either already impacted distribution or will soon do so. The new, powerful and highly profitable companies active in the distribution space have strong incentives to introduce new technologies, both to further increase profitability and to consolidate their power. RFID tags (radio frequency identification tags) are already in use and will become a much more disruptive influence. The use of drones, driverless trucks and automated warehouses has been tested and is likely to shortly become common. Very short delivery times where orders from companies such as Amazon are delivered within the hour are probably possible but not commercially viable on a broad scale just yet.

When a single company controls the entire supply chain, such as Walmart, Apple and Amazon do to varying degrees, it can impose procedures that greatly simplify and speed up distribution. Ideally there is a small and relatively constant number of particular products in the chain and, as a customer buys one, an additional one is placed on order from the factory. The key is to coordinate so only the number of products actually sold is produced. To achieve a synchronized supply chain, companies have to know where each product is at all times. The technology that facilitates this is the RFID tag.

RFID tags are already used in warehouses, on assembly lines, and in retail. They consist of a small tag with an electronic circuit that can send identification information to a reader when the reader sends them a radio signal query. Inexpensive ones are passive and respond only to queries. The more expensive ones contain a small battery and can send identifying signals for several hundred feet. The product ID generated can be unique and can contain product-related information. In a warehouse for example, an automated reader can query a newly arrived pallet of products and receive detailed information about the products in the pallet.

Unlike bar codes, that have been fulfilling a similar function, RFID tags don’t have to be in the line of sight of the reader and can identify individual products. Bar codes for a class of product are all the same and the bar codes printed on milk cartons are all identical. RFID tags can carry out bar code functions as well but they can be programmed differently for each item.

RFID tags are more expensive than bar codes but, if they allow synchronization of a supply chain, the savings can be substantial. Items can be tagged in the factory and tracked as they move through the distribution system. Shipments can be read as they are loaded into a truck and again when they arrive at a warehouse or retail outlet. A business can aggregate the RFID readings from many sources and know exactly where the products are and how many are in the distribution channel.

When new technologies in automation are combined with RFID tags, warehouses can be completely automated. There is no need for inventory because businesses know in real time what is in their warehouse. Stacking and storing on shelves is relatively easy to automate, but the challenge lies in reliably retrieving a specific product. So-called picking robots can distinguish items of different shapes and sizes and pick up the one to be shipped. The problem is that picking robots are still much slower and less accurate than human workers.

The difficulties and problems robots have are being addressed and eventually the performance of such robots will surpass that of humans. The completely automated warehouse will then quickly become commonplace.

Companies already know that drones can deliver packages – the difficulty is designing a system that makes commercial sense and doesn’t break regulations in place for unmanned aerial vehicles. Once the regulations are clear, the economics have to work. Trucks are still much cheaper for large, heavy loads or items that have to be transported for over 50 miles. For light loads and short distances, delivery drones may turn out to be less expensive.

The drones being considered for delivery applications are small and short range. Some are autonomous in that they don’t need an operator. They can deliver up to about 10 lbs. in a 10 mile radius before having their battery changed. Shorter trips are more economical because each drone can make several trips per battery charge.

In a concept that is the most advanced of the different possibilities, customers would receive a transmitter to place on a small flat area serving as a landing pad. The drones would pick up packages from a local source and automatically plot a route to the customer. They would fly to the customer’s landing pad, deposit the package and return. In one variation, the local source of the package could be a local WalMart store. In another variation, a delivery van could release a flock of drones into a neighborhood for quick, simultaneous deliveries and then leave with the drones to repeat the process in a neighborhood ten miles away. Such strategies could save money by delivering more quickly and reducing truck trips or by increasing the number of deliveries a truck can make in a given time.

Where driverless cars have to deal with many unexpected conditions and complex trip end-points, driverless trucks can move between specially designed, truck-friendly staging areas along major highways. This means such trucks are much easier to introduce than cars that have to navigate narrow roads and driveways. Combined with other new technologies, autonomous trucks can work with automated warehouses to close the loop on a fully automatic supply chain. Products would move continuously 24/7 through a fully automated system that picks up items at the factory and delivers them to local delivery points. If the customer is located near the local warehouse or store, even the last few miles of the delivery path can be left to automated delivery drones.

Autonomous trucks would keep track of what they are carrying by periodically reading RFID tags. Customers would know exactly where their ordered material was located at all times. Such trucks could follow programmed low-traffic routes, run on weekends and holidays and operate through the night. Supply chains would operate more quickly and become more predictable.

The Future of the Distribution System.The Current State (Part one)

Note: Published with the authorization of the author