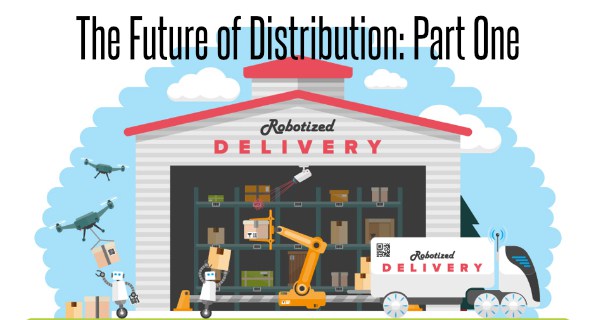 Editor’s Note: This is a guest blog from our friend Jake Rheude with Red Stag Fulfillment. In part 1 of the 3-part series, Jake discusses the current state and potential issues that arise with your current distribution system.

The distribution system of an economy is never static; new technologies are causing fundamental changes in how distribution works. On the surface, such changes might mean one thing, yet when the actual mechanics play out, the results can sometimes be unexpected. Producers, distributors, and retailers compete for market share and a bigger slice of the overall pie with unpredictable outcomes. Using innovative approaches, some companies attempt to cover the entire market segment, from production to retail. Others specialize in becoming an all-purpose intermediary. Still others try to excel in a particular niche. Examining which new technologies are likely to roll out over the next few years and how they will impact the existing distribution system can yield clues to what the future of distribution will look like.

A historical perspective and an overview of today’s distribution system will help put projected future developments into perspective. While the endpoints of manufacturing and consumer needs change relatively slowly, the distribution system can change overnight as companies implement disruptive new technologies. Those businesses not adapting get left behind.

Manufacturing develops new technologies as well but it takes time to change production lines, test new products and ramp up new production. Consumer needs change too but the basics remain the same. Neither applies in distribution. Processes such as shipping, warehousing, purchasing and selling can change very quickly and the only underlying requirement is to get the right product to the customer that wants it in the most efficient way possible.

Distribution as a separate function became widespread when mass production started in the 1900s. Previously local manufacturing had supplied local markets either directly or through local merchants. With mass production, large manufacturing plants could churn out large quantities of inexpensive products, but they lacked ties to a specific market. The people who owned and operated these plants were investors, technical people and workers. Sales people did not naturally fit into a manufacturing plant’s organization.

Wholesalers filled the gap. A traditional supply chain consisted of a manufacturer that produced the goods, a wholesaler that bought in bulk from the manufacturer, and retailers who bought small quantities from the wholesaler and offered the products to their customers. The savings from mass production were so great that wholesalers could often sell to retailers at double the price they paid to manufacturers and the retailers, in turn, doubled the price again.

Some industries organized themselves slightly differently. The auto industry sold through dealers tied to a particular manufacturer and the oil industry sold gas through branded service stations. Direct marketing organizations cut out one level by buying from manufacturers and selling directly to consumers. These models had one thing in common with the wholesale model: the producers received a small percentage of the final price. The cost of bringing goods to market remained high and the alternative methods were not able to spread throughout the distribution system.

With the development of the Internet, new and more compact models emerged. Disintermediation became a catchword and meant that producers would finally be able to sell directly to consumers. The value added by intermediaries would no longer be important and manufacturers would receive a larger share of overall revenue while consumer prices would drop.

Disintermediation through improved technology and the Internet, in fact, took place, but not through the disappearance of distributing companies. Instead, new and existing companies operating in the distribution system space took over a wider range of functions and increased their power.

Some companies attacked the traditional supply chain from the producer end. Dell Computers pioneered a model in which a computer manufacturer could sell directly to customers online. Tesla, the producer of electric vehicles, offers the cars it manufactures directly to consumers via their website. Many high-tech product manufacturers use a hybrid model in which they sell both online and through more traditional channels.

Other companies entered the distribution channels from the retail end.

Walmart is the biggest example of a retailer taking on wholesaling functions. Retailers in the past had trouble keeping track of and paying the thousands of suppliers whose products they sell. Wholesalers did it for them. Using Internet communication and computer technology, Walmart built automated structures to carry out these tasks. As a result, Walmart was able to offer lower prices than traditional retailers.

Amazon did away with traditional retail altogether and sold a wide variety of products online. Apple is solidly situated on the retail side of distribution but pays factories it doesn’t own to build its products. Instead of producers gaining power in the new distribution field dominated by technology, new and powerful intermediaries have sprung up to control markets and dictate pricing and conditions to producers.

Approaching distribution from the retail side has made some companies extremely profitable. Businesses that control a market segment and a large client base can achieve savings on the supply side from manufacturers and charge above market prices to consumers. Margins can be substantial because these businesses have taken control not only of the distribution mechanisms but also of the profits that were formerly associated with them.

Note: Published with the authorization of the author