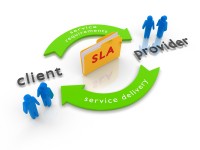 If you want to better manage your customers’ expectations, a Service Level Agreement (SLA) may be worth considering. An SLA is a negotiated agreement designed to create a common understanding about services, priorities and responsibilities.

Although an Service Level Agreement (SLA) is an excellent expectations-managing mechanism, it’s important to manage your own expectations of what it can realistically accomplish. Unfortunately, some people view an SLA as a complaint-stifling mechanism or a quick fix to a troubled relationship; however, using it for such purposes creates more problems than it solves. Instead, think of an SLA as:

To be effective, a service level agreement must incorporate two sets of elements: service elements and management elements. The service elements clarify services by communicating such things as:

The management elements focus on such things as:

Even with attention to both sets of elements, a successful agreement requires much more than simply plugging the elements into an SLA template. The process of planning, establishing, and implementing an agreement is typically a many-month process of information-gathering, analyzing, documenting, presenting, educating, negotiating, and consensus-building – and the process must involve customers. If customers are not part of the process, it’s not an agreement!

The assumption that creating an SLA is a start-today, done- tomorrow process is the most common misconception among participants in my SLA seminars. Before initiating an SLA effort, be sure you appreciate the effort involved and have both the time and the know-how to proceed.

Even more importantly, think carefully about whether an SLA is really what you need. Most organizations can significantly improve their ability to manage expectations with some relatively simple service improvements. One such improvement is to create service standards and to document and communicate them. Having done so, you are one step closer if you decide to establish an SLA.

How Not to Establish an SLA

A service level agreement can be an extremely effective communications tool for creating a common understanding between two parties regarding services, expectations, responsibilities and priorities. However, if it is established at the wrong time, for the wrong reasons, or in the wrong way, it can create bigger problems than those it is trying to solve. In presenting seminars internationally, I’ve repeatedly met people who needed to rethink their timing, their reasons or their way.

Service providers sometimes want to create an SLA to suppress customer complaints; however, attempting to establish an SLA with complaining customers usually backfires because customers will see it as just one more thing to complain about. Before engaging in SLA efforts, the service provider should obtain customer feedback, seek to understand the complaints, and take some small but visible steps to resolve the complaints. The timing may then be better to establish an SLA.

When a relationship is plagued by distrust and fingerpointing, it is not the right time to establish an SLA. First fix the underlying problems, then establish the SLA.

An effort is sometimes undertaken to establish an SLA when something less complex will suffice. For example, in many companies the division of roles and responsibilities between offices or departments is vague at best.

A manager at one of my SLA seminars provided a perfect example. The confusion within his own regional office about who did what was compounded by the confusion between regions – including those in other countries. He described a situation of redundant responsibilities across organizational boundaries, gaps in responsibilities across geographical boundaries, ambiguous job descriptions, and roles that changed daily. Sound familiar?

This fellow came to the seminar thinking that an SLA would solve these problems. By the end, he concluded that what was needed was not an SLA, but clarification within and between offices. Since achieving clarity about services, functions and responsibilities is essential to SLA success, it’s a worthwhile starting point whether or not a full-blown SLA is ultimately needed. And if clarity solves the immediate problem, investing the additional effort to develop an SLA may be unnecessary.

Most SLAs are initiated and unilaterally established by service providers. The customer is given little or no say about either the content of the SLA or the process by which it is established or managed. This is the wrong way to be successful with an SLA. Very simply, if the two parties have not agreed, it’s not an agreement, and it shouldn’t be called an agreement. The resulting document may still serve a useful purpose, but it’s not an agreement.

The very essence of an SLA is that both parties have a say. In practice, it is rarely practical or feasible for both parties to be involved in every step of creating the agreement. However, a successful SLA is one in which the two parties collaborate. When the process is truly collaborative, the resulting document can be filed away and largely ignored because the two parties have already succeeded in learning how to work together. And that’s the right way.

A service level agreement is an excellent tool for helping two parties improve communications, manage expectations, clarify responsibilities and build the foundation for a win-win relationship. However, establishing an agreement is neither a quick nor a simple process. Having worked with numerous organizations internationally on establishing SLAs, I recommend paying particular attention to the following key steps:

The two parties to an agreement often have different views about the role of the SLA and what it can realistically accomplish. Both sets of views may be valid, yet sufficiently different as to cause a breakdown in SLA negotiations. Before any SLA development work is done, it is advisable for the two parties to hold an open discussion to ensure that they have a basic level of agreement about the agreement. If they don’t – and until they do – any further SLA effort may prove futile.

In this critical, but often overlooked, step the SLA developers (those assigned to negotiate the SLA) focus not on the agreement, but on the process by which they will work together to create the agreement. Issues to be discussed include the division of responsibility for development tasks, scheduling issues and constraints, and concerns regarding potential impediments. In addition, the developers can benefit greatly by discussing their communication styles and preferences. By identifying similarities and differences right up front, they will be in an excellent position to minimize conflict.

This is but one step in the process of establishing an SLA; it’s not the entire process. In this step, the two parties create a structure for the SLA document and then discuss, debate, negotiate and, over time, reach agreement about the contents of the agreement. In doing so, they may each solicit assistance, input or feedback from others in their own organization. The duration of this step typically varies from several weeks to several months, depending on the developers’ previous experience with SLAs, their familiarity with the key elements of an SLA, the demands of their other responsibilities, and the state of the relationship between the two organizations.

The result of Step 4 is a draft of an agreement, not a completed agreement. Before implementing an SLA, all members of both parties who have a stake in, or responsibility for, the success of the agreement should have an opportunity to review the draft, raise questions, and offer suggestions. Using this feedback, the developers can conduct further negotiations, gain the necessary approvals, and finalize the document. In addition to generating buy-in, this step improves the quality of the final document.

This step entails the identification and completion of tasks that must precede SLA implementation. Such tasks might include, for example, developing tracking mechanisms, establishing reporting processes, developing procedures for carrying out stated responsibilities, communicating expectations to staff, providing pertinent training.

An agreement that is not managed dies upon implementation. Management responsibilities include providing a point of contact for problems related to the agreement, maintaining ongoing contact with the other party, conducting service reviews, coordinating and implementing modifications to the SLA, and assessing and reporting on how the two parties can further enhance their working relationship.

How Long Does It Take to Establish an SLA?

One of the questions I’m most frequently asked about service level agreements is how long they take to establish. Not surprisingly, the answer is, it depends. A service level agreement (SLA) is an excellent tool for helping service providers and their customers improve communications, manage expectations, clarify responsibilities, and build the foundation for a win-win relationship, and many factors can influence the duration of the effort, such as:

Given these factors, how long should it take to establish an SLA?

A misconception about SLAs that I encounter regularly is that they can be created quickly. Some participants in my SLA seminars arrive under orders from management to complete one the following week (or last week, as one recent participant bemoaned). Management mandate notwithstanding, participants soon understand the impossibility of this task, and face the challenge of helping their management achieve this same understanding.

Developing an SLA in a week or even a month is both difficult and inadvisable. It is difficult because of the extensive workload involved in such tasks as negotiating service standards, establishing tracking mechanisms, preparing supporting procedures, gaining approvals and generating buy-in. And it is inadvisable because the process is designed to help the two parties build the foundation for a strong, successful, long-term relationship. To rush this process is to sabotage the entire effort.

“Too long” refers not to a specific time period, but to an effort that has stalled and is making no progress. One major contributor to a stalled effort is a lack of familiarity with the process of establishing an SLA. I recall one manager who energetically announced that her group and its customers would have a completed SLA in six months. Yet, after six months the effort had gone nowhere. She admitted that when they got right down to it, no one was quite sure what to do first and what to do next.

Establishing an SLA is typically a many-month process of information-gathering, analyzing, documenting, educating, negotiating, and consensus-building. I have found 3-6 months to be a good rule of thumb. When circumstances are optimal, three months is realistic, and sometimes even less. At the other extreme, if the situation is a complex one, six months may not be enough. However, if significant progress has not been made within six months, it’s time to stop the effort and examine why.